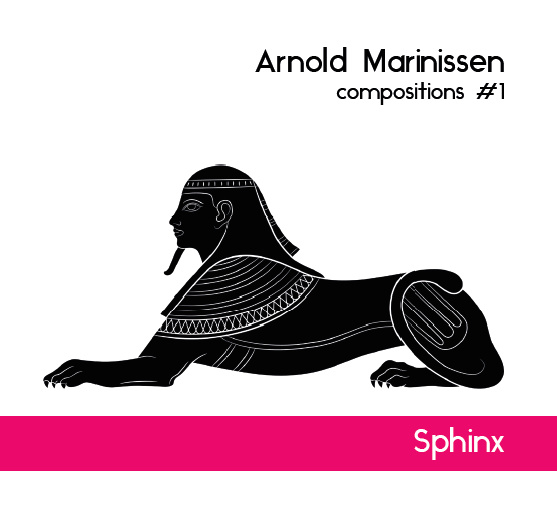 Arnold Marinissen about his work: ‘For me, creating music is all about immersing. Warmth and pulse are words that come to mind when I try to describe my music. Voice and text are important; I like to follow the route that a text lays out for me, to deal with breath, diction, nuances of intonation, and I’m intrigued by the personality of each individual voice.’

With his background in percussion he also likes to write for this multi-coloured family of instruments. But he equally gladly dedicates himself to strings, winds and keyboards, electro-acoustic music and music for dance and film.

This album encompasses six compositions by Arnold Marinissen: two ensemble pieces, three solo works and a tape piece. Von Pferden, Gräsern, Sonnen, Menschen for vocal quintet, written for VocaalLAB, now Silbersee, was selected by the Dutch Toonzetters as one of the 10 best premieres of 2011. Sphinx was created for cellist Katharina Gross. Totem was commissioned and premiered by marimbist Ramon Lormans. La Pizia e la Marangona for soprano was composed for a lecture performance which Channa Boon created for the Biennale di Venezia 2015. She also made the libretto. Marinissen wrote music for several performances by dancer/choreographer Ederson Rodrigues Xavier; Guts I is one of the resulting works. Iron Velvet for percussion sextet was commissioned by the Jan Pustjens Foundation, for the occasion of its 2018 Focus Day.

Marinissen’s music has been played by ensembles such as Asko|Schönberg, Ensemble Variances, Exaudi, Lunapark, Netherlands Chamber Choir, Percussion Group The Hague, Prisma String Trio, Silbersee and the Storioni Trio, in the Holland Festival, Biënnale di Venezia, Cross-Linx, November Music, Huddersfield Contemporary Music Festival and Storioni Festival, amongst others. His music also sounded in the Dutch cinema film Bernard. Marinissen was artistic leader of Percussion Group The Hague and, together with Anthony Fiumara, Lunapark. He was artist in residence at De Doelen Rotterdam, programmer for Muziekgebouw Amsterdam and curator for various festivals. He is faculty member of the Conservatorium van Amsterdam. Marinissen’s music is published by Deuss Music.